The Janner case – questions for Creedon and the IPCC 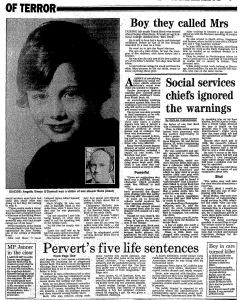 It’s interesting that Leicestershire’s Police & Crime Commissioner apparently did not know about his own force referring itself to the IPCC when he announced, in September 2014, that his force was going to conduct a review of  historic child sex abuse cases.

December 2012: I am asked by victim(s) of child sex abuse to investigate malpractice and corruption in a case(s) that is linked to the Leicestershire child sex abuse inquiry of the Nineties.

January 2014: Derbyshire’s Chief Constable, Mick Creedon, refuses to answer a question from me (as voluntary CEO of Kids for Cash UK – K4CUK) about missing evidence in the Beck trial that related to Greville Janner. Creedon was the Leicestershire Detective Sergeant that led the Beck investigation in the Nineties.

September 2014: Creedon makes a public statement via The Times saying that he was leant on by senior officers not to investigate Janner.

30th April 2015: Leicestershire Constabulary claims that it referred itself to the IPCC in September 2014 and, as a consequence, will not be answering any further questions on the Beck / Janner case.

1. Can you confirm that, with regards to the Janner case, Leicestershire Constabulary referred itself to the IPCC in September 2014?

2. If the reports of the IPCC’s involvement are correct, please confirm at what stage the IPCC is at with its investigation.

3. Given that the information contained within my letter and attachments sent to (IPCC Chair) Dame Anne Owers on 23.03.15 included evidence pertinent to the Janner case, who authorised the ‘no further action / placed on file’ decision?

1st May 2015: The Times reports that Creedon is to be questioned by the IPCC.

It’s clear from one of the witness statements published by the Daily Mail that, in 1991, the then Detective Sergeant Creedon knew of Janner’s sexual abuse of children well before the Frank Beck trial and even questioned victim(s) on the matter. The wider question for Mick Creedon, Derbyshire’s current Chief Constable, is:

“Why did you stay silent for over twenty years about a conspiracy to pervert the course of justice perpetrated by senior Leicestershire police officers?”