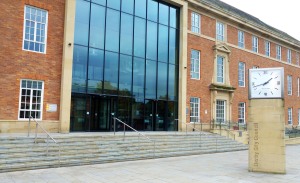 Senior social workers and police officers falsified and destroyed records after Kids for Cash UK exposed evidence of harm to a twelve-year-old Derby boy whose mother was found by a court to have made multiple false allegations of domestic violence.

An investigation by Kids for Cash UK has revealed that Derbyshire Constabulary police officers and senior social workers within Derby City Council’s Children’s Services department destroyed evidence and falsified official records to conceal severe psychological harm being caused to a child after its junior officers had been duped by false claims of domestic violence made by the child’s mother.

In a Derby court, the mother was found to have lied to social workers and police officers and had gained the support of friends by concocting false accounts of domestic violence that she spread, over a period of months, using Facebook messaging. The mother had previously used the false allegations to secretly obtain a court order to prevent the father’s access, allowing her to continue the psychological abuse of the child. When witnesses came forward for a court trial with information that the child was being sedated and psychologically abused, the mother organised friends to seek out the witnesses and conduct a prolonged campaign of witness intimidation against them. Police officers and social workers failed to share key evidence from independent witnesses and allowed the abuse to continue. When the failures came to light, senior social workers and police officers falsified official records and destroyed evidence.

Lawrence English, Senior District Crown Prosecutor said, “The Crown Prosecution Service made enquiries with the police to see whether [we] could replicate the [prosecution] file submitted by the police. It became apparent that not all of the material referred to by the reviewing lawyer is still held by the police.”

Despite claims from CPS that it was willing to review the file, the Derbyshire Independent has seen documentary evidence that confirms that CPS later refused to review a prosecution file reconstructed by Kids for Cash UK after it had recaptured the original evidence, as well copies of additional evidence that had been withheld and then later destroyed by police officers.

David Gale of Kids for Cash UK said, “Our investigations have confirmed that the mother subjected the child to a prolonged period of severe psychological abuse despite the authorities admitting to having received clear independent evidence pointing to the harm being caused. It is clear from the documentary evidence that we have gathered that senior officers within Derby City Council and Derbyshire Constabulary have failed in their statutory duty to ensure that they have procedures in place to secure evidence and to ensure that official records are not falsified by officers seeking to avoid blame. The latest evidence suggests that the police, Derby City Council Children’s Services, and the Crown Prosecution Service have colluded to prevent their failures from coming to light.”

Following Kids for Cash UK’s analysis of five years’ of raw statistical data, gained through Freedom of Information requests served on the Ministry of Justice, an epidemic of false claims relating to domestic violence in the East Midlands has been exposed. The Ministry of Justice has confirmed that it recently launched a nationwide investigation into legal aid fraud related to false claims of domestic violence. That investigation is starting in Derbyshire.

Derbyshire Constabulary’s Chief Constable, Mick Creedon, declined to respond when we asked him to comment on this case.